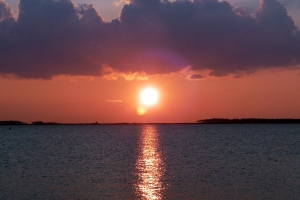 Sunset on the Chesapeake Bay

We live in an age that’s increasingly disillusioned by institutions. A Washington Post/ABC News poll taken after the recent government shutdown shows a historically low 12% approval rating for the US Congress. Those dramatic poll numbers come after ugly partisan gridlock but follow a consistent historical trajectory of growing disenchantment with major institutions, including organized religion. A common refrain today is, “I’m spiritual but not religious.”

Even so, our disillusionment doesn’t compare with the widespread frustration with political and religious institutions in Palestine during Jesus’ lifetime. Hostility toward the Roman occupation of Palestine fed a simmering insurrection that eventually erupted into open rebellion. The animosity spilled over onto Jewish religious leaders and organized Temple religion in Jerusalem, which exploited common people and collaborated with the hated Roman imperialists.

According to the gospel narratives, Jesus had running battles with the religious and political elites in Palestine. He challenged organized religious structures related to worship in the Temple, which exploited common people (Luke 19:46). Ordinary people recognized a spiritual authority in him that was different from the authority of institutional religious leaders (Mat. 7:29). What kind of spirituality was it and what can we learn from it?

Comparatively little has been written about the spirituality of Jesus. In contrast, major theological battles have been fought, opponents have been persecuted, churches have split, and interfaith quarrels have erupted over different claims about the humanity and the divinity of Jesus. It’s not my intention to enter into those arguments other than to say that they add little to the question at hand. Likewise, scholars studying the historical Jesus have long debated the extent to which Jesus was (1) a prophet inaugurating the rule of God, (2) a sage or religious teacher, (3) a healer and exorcist, or (4) a savior and liberator (Roger Haight, Jesus Symbol of God, 60-78). These debates have also largely side-stepped the question of Jesus’ spirituality.

Yet all the gospels record that Jesus’ public ministry began with an intense spiritual vision of the Spirit descending on him and a voice from heaven proclaiming that he is God’s beloved son. This was immediately followed by Spirit initiated trial in the wilderness that lasted for forty days (Mark 1:9-15). Biblical scholar Marcus Borg notes that this experience placed Jesus in the Spirit-filled heart of Judaism that included historical figures such as Moses and Elijah (Jesus: A New Vision, 40-46).

This Spirit-filled center of Judaism involves a contemplative and mystical spirituality that has been largely lost in Christianity. In my next post I will explore some aspects of this spirituality and what we can learn from it.