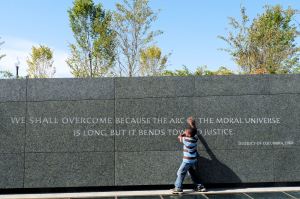 This is the last post on my series on an Anabaptist Social Gospel. I have not written for several weeks because of the Christmas holidays and partly because I had writer’s block. I was struggling to know what to say about a public Anabaptist theology and how we engage the world. I ended my last blog with a description of how the congregation where I serve as pastor is engaging our community in Fairfax, Virginia. Such concrete examples are a good place to start, yet I want to help us think more broadly about how we relate to our world.

I have been reading the book To Change the World: The Irony, Tragedy, and Possibility of Christianity in the Late Modern World by James Davison Hunter. The primary thing I take away from his book is how American we are and how unaware and unreflective we are about this. Our engagement in the world is so powerfully refracted through our American cultural lens.

Our efforts to change the world reflect our individualistic culture. Consequently, we concentrate on changing the hearts and minds of ordinary people, on populist social movements, and on personal evangelism. Hunter argues that such approaches to social change will never achieve their goals because they fail to recognize the power of government, corporate, media, educational institutions, and the networks of elites within them. That’s why we’re at once a deeply secular and a deeply religious society.

Our default strategy for social change is through electoral politics. Hunter writes, “While Christian activists (conservative and progressive) have been fairly influential in the political sphere . . . they have embraced a means to power that seethes with resentment, anger, and bitterness for the injury they believe they have suffered. The public and political culture of contemporary Christianity have become defined by such negations” (275).

Alternatively, Hunter proposes working toward a new city commons through faithful presence. The biblical example he draws on is the prophet Jeremiah’s advice to the Jewish exiles in Babylon, “Seek the welfare of the city where I have sent you . . . for in its welfare you will find your welfare” (Jer. 29:7). Being faithfully present is an alternative to outright hostility, withdrawal, and assimilation. Such faithful presence requires living within the tension of both affirming our culture and being counter-cultural when required by Christian discipleship.

This requires affirming the centrality of the church, especially life of the local congregation. Hunter writes, “The church is God’s gift to his people and part of what makes it a strategic gift in our time is that it is a community and an institution. Constituted by powerful ideals, truth, and narratives, patterns of behavior and relationship, social organization, and a wide range of resources, institutions are a social reality that are larger than the sum total of individuals who make them up” (282).

A central task is the formation of Christian lives. “Formation into a vision of human flourishing requires an environment that embodies continuity, historical memory, rituals marking seasons of life, intergenerational interdependence, and most important of all, common worship. Absent these things, new Christians will have no idea where to begin their walk of faith no matter how many books they are given” (283).

The church cannot flourish nor serve the common good if it isolates itself from the larger culture. This brings us back to the kinds of engagement that our congregation is involved in, beginning in the City of Fairfax where we’re located. We serve, we affirm and seek to strengthen our culture’s healthy qualities and we humbly critique and seek to subvert its more destructive tendencies. Triumphalism is never warranted, but it is possible that, in these ways, we can help make our world a better place.